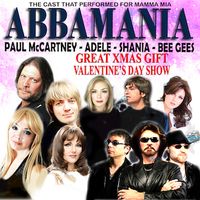 Abbamania is the world’s number one production of Abba. This all Canadian cast is from Ontario Canada, has played over 200 shows per year since 1999. They have performed more concerts then Elvis, The Beatles, Madonna and Michael Jackson combined. Abbamania has performed for the past 23 years to sold out concerts, with the London symphony, San Diego symphony, Boston symphony, Vancouver symphony, Denver symphony , the Calgary Symphony and Montreal symphony, to mention a few. The show consists of studio musicians that recreate Abba live in concert. Every song recreated note for note, sound for sound to make this show the most authentic Abba production you will ever hear. They are the only Abba production to perform twice for the cast of Mama Mia. Appearing on the show is Night Fever/ The Bee Gees Special guests, Ian B Garcia form the Broadway Musical “Rain” as Paul McCartney. Angela Seeger as Adele and Amberley Beatty as Shania Hear the hits from “Waterloo, S.O.S to Dancing Queen”. New York Times - “vocally superb, every song note for note, exactly as the original recordings” Rolling stone Magazine –“Abbamania is incredible” Cast of Mama Mia - “Abbamania is ABBA” Globe&Mail - Amazing performance, wow!!