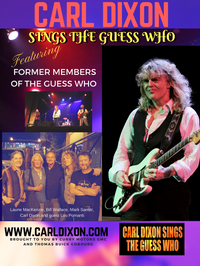 CARL DIXON'S powerful vocals have been described by National radio as one of Canada's stellar rock voices. His positivity and heart brings warmth, soul and power to the iconic Guess Who songs. Now Carl is joined on stage by former band members of The Guess Who including Bill Wallace who wrote some of those famous Guess Who hits. It's a night of great songs, the stories behind the hits and music by musicians playing true to the original Guess Who sound. Also appearing is Laurie MacKenzie who was with the band for 8 years.